The crew that live and work on the site in the months before and after the event have been watching a family of wedge-tailed eagles not far from camp. The eagles have built a nest, and the crew have watched in awe as the chicks have hatched and learned to fly. As you may know, Wedgies are huge, huge birds of prey, and throughout the year the adult birds can be seen Circling High and Wide above the site. So this year’s mascot? The wedge-tail eagle. Reggie The Wedgie.

2006 will be Meredith’s sixteenth year. Time for a sweet one we think.

2006 will always be remembered as ‘the hot Meredith’. “Hot” doesn’t really adequately describe the incredible, unrelenting oven-like conditions that lasted the entire duration of the festival. The site was dry in the lead-up, so everything was a bit parched. Three days of 40+ temperatures made Meredith 06 almost unbearable. By 8am it was 30 degrees. At 3am half the crowd was still shirtless. It was hot, dry and incredibly uncomfortable. The only respite from the daytime sun was ironically enough a thick smoke haze that had drifted across from long-running bushfires in Gippsland. The fact there was barely a breath of wind meant everyone just baked. Organisers ensured free drinking water supplies were plentiful and made all the showers onsite free of charge. Regular messages about hydration and slip slop slap were relayed over the PA system. Teams of Crowd Carers were out on force. Emergency services were all on hand equipped and staffed and at the ready. And everything ran smoothly. In fact, some of the alltime great performances were experienced that weekend. Sweden’s rock icons The Soundtrack of our Lives wrote themselves into Meredith folklore. They’d been rocking the Amphitheatre for half an hour on Saturday arvo when singer Ebbot called things to slow down…the band got quiet, and he got the whole amphitheatre crowd to sit down. For some reason there was only one dude who didn’t –or couldn’t – sit down, and he looked like a mirror image of Ebbot right down to the beard, long hair and flowing kaftan robe. Ebbot walked out through the crowd and embraced him. “Where you been all my life” he cracked. The band built it up again, the crowd stood up in rapid ripples around them, then it kicked in and the energy went through the sky. 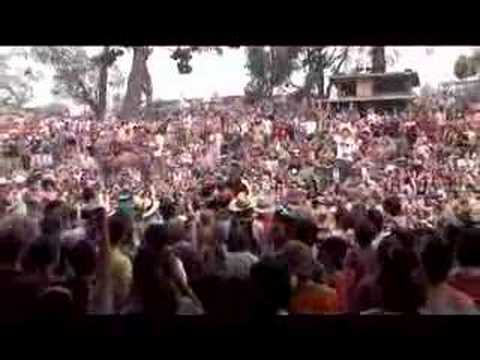 When I wandered backstage the next morning, Ebbot was still near his dressing room, asleep, having spent the whole night basking in the afterglow long after his bandmates had left the site.

The urge to dance to Kid Koala’s set in 40 degrees Sat arvo was irresistible and he got the place thumping too, as the sweat poured off him in buckets.

Saturday night Cornelius played. That sounds simple enough, but he took live performance production experience to a new level. The whole stage was a hi-tech wonderland, he would touch a part of the stage wall – an LED screen – and the screen would react, like a giant iphone, only a few years early. It was a super massive effort to get all the gear and lighting they required to put on their audio-visual extravaganza, made doubly difficult by inhuman heat and a Japanese-English language barrier, but after much sophisticated technical dialogue and plenty of sweaty heavy lifting, the Cornelius Sensuous Showcase washed over the Amphitheatre like a cleansing new wave. It seemed to reset the festival. I stood in the crowd, after the hottest Meredith day on record, and watched the masterwork of sound and vision take place in the Australian bush and thought…boy, we really suffered for our art today…and man, it was so worth it. And I wept with joy and relief and pride in the team and the people that go to the festival. They weren’t just there to be entertained, or because their friends were going. They weren’t even there to see Cornelius or any other act necessarily. They were there because of something much more than that, something I don’t think there is a phrase to describe. If you’ve been to Meredith (or something that might create that same feeling) and had one of those moments, then you understand. I dunno, it was a little bit like watching a fairytale sports comeback, or an emotional wedding speech…here I find I am inadequate as a ‘writer’ to get this one across. Anyway. Maybe next draft will unlock it. “You had to be there”. Lazy. One young man from the crowd actually joined the band for a song. 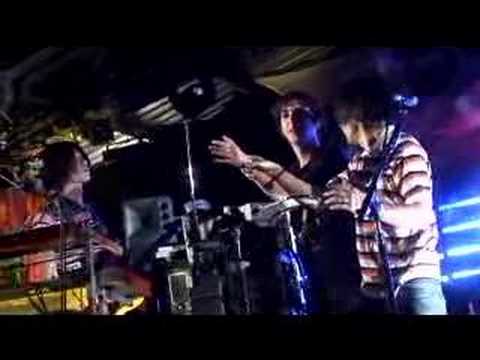 Who else played? Midlake, Tapes n Tapes, The Drones, Edan, Sand Pebbles and many others. Augie March reached the zenith of many Meredith performances. And a chap named Greg hit the stage at about 2am, declared he “had a plane to catch” and unleashed the most loco performance you’d see. code name: Girl Talk.

Datarock pushed the envelope of ‘live’ at the end of their set – the crowd wanted an encore, but they just rode BMX bikes onto stage and played the full recording of “I’ve Had The Time of My Life” as they saluted and slapped hands with the crowd. It was clear there was no rule book anymore…if it felt right it was right.

Vale Ian Rilen, who was booked to play with his band The Love Addicts but passed away in October. We asked Spencer P Jones to play and he and band were wonderful.

Other things that happened this year included a documentary film about Meredith’s first fifteen years by director Rob McCafferty screening at the Melbourne International Film Festival. After sold-out showings, it won the annual Audience Award. Rob originally came to the attention of organisers when he wrote to Aunty in about 2002 saying “I’ve been making a Super 8 film about Meredith for a few years and I’m a bit sick of getting bumped by dancing etc in the crowd when I’m trying to film…any chance I could please film from the side of stage? I won’t get in the way…”. Oh, Rob, come with us!!! Rob has ever since been the festival official videographer and film-er and is responsible for the dozens and dozens of terrific, momentous live clips that exist on the world wide web for all to see in posterity.

2006 also saw the advent of some things that were and remain as big a hit as any band on the stage – Uncle Doug’s composting Loos. Uncle Doug had spent many many hours reading through Australian Standards and researching and ruminating on a better system of toilets for the festival. With help from Hamish and Natural Events, he came up with the solution, and built a trial bank of waterless, flushless, odourless, private composting loos. No water, no chemicals, no trucking or pumping involved. And after a simple-yet-sophisticated on-site organic treatment, after a year or so they produced good quality, safe useable compost for the site. Amazing! That year there were still several toilet trucks and portaloos as had been usual, and a row of these new eco-loos, as we didn’t know if people would like the idea or not. I’ve never seen a prouder Uncle Doug than when he realised people would rather queue to use the eco-loos than walk into the vacant portaloos. A giant success for him, the festival and the environment. Good work Uncle Doug and your close confidant Gregor Peelie Peele.

Also new in 2006 (or maybe this was its second year) was a 24-hour convenience store called Heaven Eleven which sold milk plus fruit plus eggs plus vegetables, toothpaste and flavoured milk. Margarine, beauty crème, magazine and some militaria. But mainly ice creams.

Also, Meredith spawned a little sister – Golden Plains. Demand for Meredith tickets was frankly out of control, and for a variety of reasons organisers decided to try a new festival at the same place at a different time of year – Autumn. The first Golden Plains lineup included Comets on Fire, The Bellrays, Yo La Tengo, The Drones, The Avalanches DJ Show, The Slits, !!!, Gotye and many more. It worked really well. Tickets were sold firstly to Meredith and Golden Plains subscribers using a ballot system, before further allocations were sold in stores and online.

The Ballot system was introduced partly because the system for tickets to Meredith, by 2006, was frankly archaic and simply not coping with demand. When tickets went on sale for 2006 Meredith, there was a fiasco. To cut a long story short, organisers put their faith in a certain third party’s website, which despite repeated prior assurances to the contrary crashed immediately, and crawled along at an injured snail’s pace for a half a day, causing mayhem, anguish, intense frustration and of course anger. Sales were suspended for a week whilst the mess was sorted out. Aunty Meredith issued a lengthy and detailed apology. It’s fair to say the festival lost some fans that day, and fair enough too.

Aunty contacted each and every person who wrote rang emailed complained or contacted her in any way. Rigorous research into how over-subscribed ticket systems worked around the world followed. Models were put forward and debated. Subscribers were invited to give suggestions, and boy did they ever. Eventually a 4-part system was unveiled and is still in operation today. Firstly, a ballot for subscribers allocated about half the tickets. Then, traditional first-in-best-dressed store sales accounted for a couple of thousand more. Then, an online allocation went on sale to all comers. Lastly, a small allocation called Aunty’s Last Chance was available by written application. This was intended for those who had missed out along the way despite their best efforts and were the unlucky, or most passionate, or had some hardship, or in Aunty’s eyes, simply deserved to get tickets.

Not a bad year. Bit too hot.