1998 saw a few innovations – the introduction of MEREDOOF – Meredith’s late night beats-fest thumped till dawn and was a total winner. Breakdancing was witnessed by several thousand astonished punters – the Wickid Force Breakers put down the cardboard and spun on their heads (don’t know the technical term). Honeysmack, Frontside and Slieker totally slaughtered the big MEREDOOF crowd.

This year also saw the inception of The Pink Flamingo Yacht Club Bar. Meredith of course couldn’t possibly have just a beer tent, no, no, no. A swank, late-nite and all day bar on the hill which glowed pink all night complete with nautical decor, with your hosts Commodore Pink Jazz and Commodore Bahamas Lite.

Musical highlights were very many and included Meredith’s first international acts: and what a way to start – San Francisco’s The Make-Up were just plain the best band in the world during their set.  We thought we’d lost a bunch of photos of that set but found some film negatives in the archives in 2010 and got them developed and ..wow. It was a Happening. 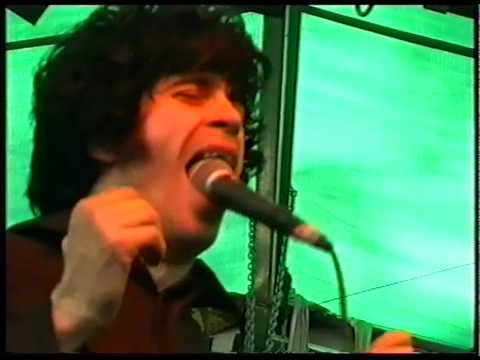 Joe Pernice was booked and advertised but cancelled not long before the festival. The Meanies reformed and basically headlined to a very full Amphitheatre who lapped it up. Wally fronted up on the Sunday with Even. Custard were great again, Sunday morning was a Gospel kinda thing with Kerri Simpson and Chris Wilson. Other notables were Something For Kate, Bodyjar and Shihad.

The constant evolution of Meredith took a turn for the best this year, all the facilities, artists and décor lifted a substantial amount. The festival took a giant, fancy-pantsed step forward. Meredith was now in technicolour.

Here is some of What Was Said about the festival:
Beat – Meredith Music Festival 1998 – by Emma Raphael
Inpress – Front Cover
Inpress – Festering For A Weekend – by Andrew Fenton and Dougal Robertson
Inpress – Review: Meredith Music Festival – by Andrew Fenton and Dougal Robertson
Sunday Herald Sun – Laid-Back Giant Party Rocks On – by Paul Stewart
The Age EG – Meredith The Dangly Bits – by Patrick Donovan and Myfanwy Warhurst